We changed some stuff in the game during the holidays. But it makes sense: we test so that we see what actually works out and what doesn’t.Nhe next step: we are going to make a video of the game! Stay tuned!

A few words from Greg Kruppa, the designer

After months of intense testing we are about to finish the core game. The current 2.15 prototype will soon turn into a reviewer edition made by the Kártyagyár (‘Card Manufactory’), a Hungarian board game prototype manufacturer.

I love this design phase: every mechanism is now in place and working well, the basic features of the game are solid and I can concentrate on the details and balance. On which card should I use a certain illustration? How could the starting position be a little trickier? How can we improve the weaker characters? How hard do we want to set the default game exactly?

I have all the tools in my hand to manipulate these parameters, and I’m not afraid to use them. Finishing touches – of any kind – are making me happy, because it’s sure that it’s going to bring good results, but I still have enough time to make it perfect.

I can’t wait to see the first officially complete copy of the game. 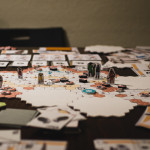 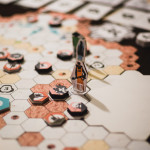 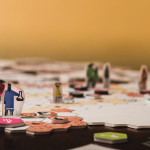 The Scientist next to a designated victory area.

The most important changes: