Let’s take a look at last week in retrospect.

Game tests. Oh yes, we have visited four board game clubs this week. Plus 2 more play testing with friends. + BGG extra. That means

18 hours of intense playtesting this week.

We really want to bring you a balanced, polished game that feels great to play from 2 to 6 players, for beginners and advanced gamers alike. Balancing is a delicate process. On Saturday we have made some modifications of the starting game tiles – and the game became too hard to beat on Sunday! Fortunately, the basic mechanics are good enough so you only need to make small changes in order to make a notable increase/decrease in difficulty. 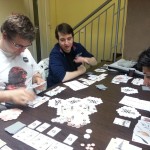 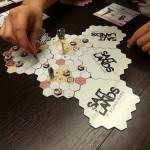 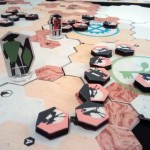 After a long wait, Saltlands now has an entry on BoardGameGeek! We wanted to adhere to the policy and have only uploaded the game after it has been completed. At least, we really think that only small changes are to be made before finalizing the prototype that is going to be sent to the reviewers. Note: image and content uploads are still in progress, and will take some time due to BGG moderation policy. So we proudly present:

Our graphic designer is working hard to fill up all cards with his stylish graphics design. Of course this is still not final, backgrounds are to be added etc. People love his works so far, although there are still a few who swear that Mr. Kruppa’s minimalist ‘prototype’ graphics are way better (see the little girl on the third picture?)… what do you think? 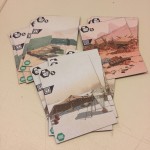 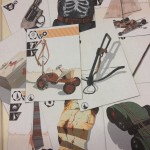 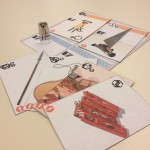